I began 2019 reading A Room of One’s Own, a treatise by feminist writer Virginia Woolf. Written almost one hundred years ago, it was the amalgamation of two speeches that she was asked to give on the topic of woman and fiction. In these approximately one-hundred pages, she explores the history (or lack thereof) of women’s writers, what she believes women need to be successful as writers, and what she believed would be the future of women’s literature.

The two things that she believed women required to be a success as writers were:

It is from this assertion, of course, that the book drew its title.

Woolf made a strong argument that both men and women writers needed an independent income in order to be true to their muse. In other words, in order to write the stories that you truly wanted to, you could not be dependent upon writing as your income. Otherwise, the temptation is to write what will sell, not what you feel or believe. It is a sentiment that I strongly believe.

But it is that second condition upon which I wish to focus this morning: a room of one’s own.

Woolf pointed out that men, at least of her time and class, often had studies, rooms of their own to which they could escape. Women, on the other hand, had to private space to herself. She firmly believed that a woman needed a quiet room, all her own, with a locking door, in order to write. I admit I am a bit dubious about this one. For one thing, it flies in the face of the nature of feminine literature, which has an open and all-inclusive feel to it.

But was that a mere justification for my own situation?

You see while @HomeCrazzyHome has close to two dozen rooms, I did not have a single space all my own. Well, other than in name only. I had a lovely study. I had decorated it to my taste. A soft blue-green paint called Wellbeing. Bright rainbow tye-dyed curtains that I made myself with matching wall quilts. One that said HomeCrazzyHome and another that was a goals quilt. I was surrounded by my dolls and curvy Barbie collections as well as my books. I had even begun what I call my goddess art collection. It was perfect. Well, it was perfectly me.

I had barely moved into it when @PanKwake decided that she NEEDED guinea pigs. Of course, since they squeaked and made noise, they could not live in her rooms. My brand new study had a corner that would be ideal for them. And so began our saga of first two then four guinea pigs. 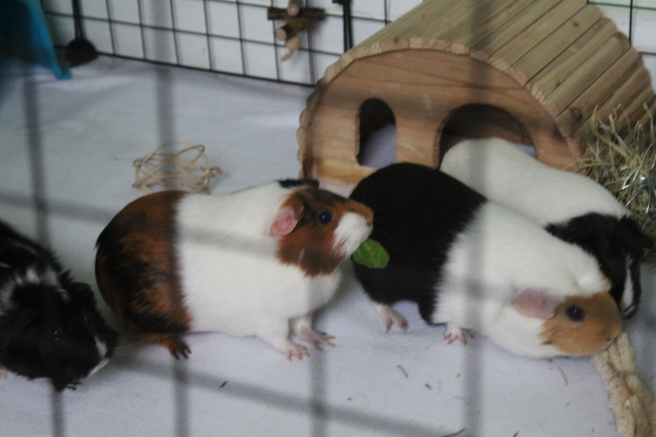 I quickly discovered that it was not just the noise but the smell (no matter how hard you try to keep the cage clean) that ran me from my study. I abandoned it to their sixteen tiny legs. To the point that my study was rechristened the ‘guinea pig room’ or the barn.

Alan bought me a laptop. And I moved from room to room. Claiming a corner of first the family room, then the formal junk room. (It is the room earmarked for the formal room but at the moment it overflows with junk that does not have another home.) It was not bad. I won a couple of NaNo’s with the arrangement. I was even able to formulate a writing routine for the past few months. I get up at five a.m. Before Alan and PanKwake. I write in solitude, which is what I think Woolf was trying to get at.

Then a few months ago Alan’s allergies went haywire. We had known about his allergies when we got the girls. But he had adjusted to our cat. We hoped he would them as well. Then too the plan was to keep the door closed and him away from them. When it was just two, that sort of worked, as long as he did not come into ‘my study.’ But when our friend foisted two more on us, combined with a weakened immune system that has not recovered from food poisoning, it was too much.

We tried for months to keep them cleaner, to make certain he did not go in that room, for me to shower after handling them. We tried it all. He was not getting better. In fact, he was getting worse. To the point that he began to have other health issues including joint pain. His doctor diagnosed sarcoidosis. Our girls had to go.

Still, we struggled to find them a good home. And he kept getting worse. On Tuesday, we broke down and with a friend’s help took them to a reputable, local pet store that had been recommended by a former employee that now works for the conservation center of which we are members. I won’t lie or justify myself, it was a traumatic experience for our girls and me.

But I came home and immediately began the process of de-guineaing my study. I broke down their cage and washed in it bleach in the tub. I bagged disposed of all their stuff. I washed down the baseboards and fireplace, any surface they would have touched. I even started ripping up the old carpet. Of course, that only stirred it all up. That night was the worst I have ever seen Alan’s breathing. He had to use his inhaler at least half a dozen times.

The next morning I finished up moving things around and getting the old carpet out of here. I discovered a wood floor that with a bit of tender loving care will add character to the room. And I moved my writing space into that corner cubby that had been the girls home.

But it was more than simply cleaning and rearranging, I began the process of mentally reclaiming my space, my room of my own. I call it my study again. And for the past couple of mornings, I have sat at the desktop here and written.

Of course, it is not done yet. In fact, I shall be back in the formal junk room on Monday. The builder will be sanding and refinishing the wood floor. That is going to be quite a task, not just for him, but we have to move everything, and I mean everything even my artwork out of here. The dust will get over everything.

But once that is finished, then I have made it known, this is MY space. MY room of my own. No more pets. And while the door does not lock, it does shut well.

Yes, I am looking forward to asserting control over a space all my own again. Putting up more of my art. Adding my sewing as well.

Will it make a difference to my writing? As Woolf believed will have ‘A Room of One’s Own’ allow me to spend more time with my writing or perhaps to be more productive?

I don’t know. First of all, this room is bare-bones right now. I have not bothered to bring more stuff into it, once we discussed a timeline for the floors with our builder. No point moving shit in for a couple of days. Secondly, two days can hardly a trend make.

Of course, I will have empirical data in the end. I have been tracking my daily word counts for both editing and writing since July. Lovely Excel spreadsheets that I update daily. And with my 2020 goal of #1Mwordsin2020 (One-million words in 2020), every little bit helps. Especially as I also have a wedding to plan and quilts to make for the show this summer. Oh, and three blogs, soon-to-be four. A man and a teen to feed. And a huge house to keep clean. Did I mention that I also grow our own as much as possible?

Yes, Virginia, there might not be a Santa Claus. But this woman writer finally has ‘A Room of One’s Own.’ So, maybe there is a Santa Claus after all?