I wanted to share with ya’ll a little present this 4th of July…and straighten out some misunderstandings.

For the good stuff first…

Nothing Done In Love 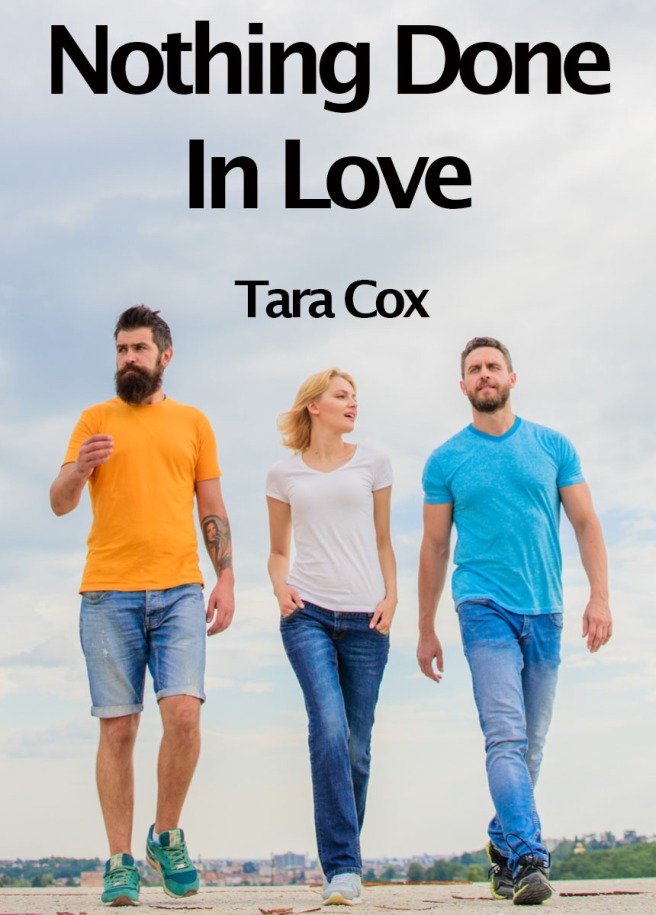 If, in your darkest hour, you were gifted with a second opportunity to fulfill your deepest fantasy, would you have the courage to Chase your Chance at love and happiness?

Kindergarten teacher Kaitlin Danvers is facing the unthinkable – the premature death of her mentor, best friend, and Mommy. Everything she has ever known or believed is shaken to the core as she faces an uncertain future without the only person she has always relied upon. Well, almost the only person…

Navy SEALs and identical twins, Chance and Chase Logan, have grown up on the dry, hostile battlefields half a world away from their best friend  – and the only woman either has ever truly loved. In their darkest hour, the only thing that had given them hope, light, and the will to go on was always the memories of her sweet kisses. And how incredibly right it felt with her pressed between them that one night, a lifetime ago…

Now they are back. Older and wiser, their bodies and souls scarred by things that no man should see or do, but someone always has to…

Back just when she needs them most…

But will things be different this time? Will Katie find the strength to embrace an uncertain future? Gifts she has denied for a lifetime? And especially an unconventional love – that in the world’s eyes tests even the boundaries of her off-beat guru mother’s message that…

Nothing Done in Love can ever be wrong.

This work is licensed under a Creative Commons Attribution-NonCommercial-NoDerivatives 4.0 International License.

Additional Warning – This is another of my veteran stories with strong content including PTSD.

But that’s why I selected it for today.

Okay, now that the good shit is out of the way. If you’re still with me, I want to clear up a bit of confusion around my profile on Literotica.

Some readers are commenting on how wonderful it is that a UK writer can get ‘Texan’ so right in my stories. There’s a damned good reason for dat.

I am American. I also consider myself a bit Texan (though most ‘real’ Texans would disagree). Gig ’em.

But, I have lived in the UK for the past fourteen years. The last four of those years in Wales. And I have only been home a handful of times in all that time.

Which leads me into the next bit of this…

And should we, any of us, be celebrating things like the 4th of July or Veterans Day? Aren’t we just glorifying war, racism, and colonialism?

Admittedly, I am not a television watcher. I did not watch that series. I have taken that clip completely out of all context. I don’t have the foggiest notion of who any of those characters are.

And I also contest other points he made. He spoke about a ‘golden era’ that never really was.

That Declaration and Constitution, he spoke about, wasn’t for everyone. It wasn’t even for just white men. It was for RICH white men.

One of the greatest debates of the Constitutional Convention was the issue of who got the vote. Obviously, not women, blacks, or Native Americans. But here’s a fact for you – there was NOT a single poor man there. And the rich white men in that room did not trust the common man with the vote.

In fact, the institution of slavery in America was codified and extended beyond its economic lifespan in that room. Article I, Section 2 of the U.S. Constitution states:

Representatives and direct Taxes shall be apportioned among the several States which may be included within this Union, according to their respective Numbers, which shall be determined by adding to the whole Number of free Persons, including those bound to Service for a Term of Years, and excluding Indians not taxed, three fifths of all other Persons.

What ensued for the next ‘four score and seven years’ was a diplomatic disaster of trying to maintain the political and economic balance of power between not just states but an incredibly small proportion of, you guessed it, RICH white men.

Heck, let’s be honest here, black slaves and ‘Indians’ were still more highly valued (three-fifths of a person) than the richest white woman. Do you get that? Women were denied any semblance of personhood.

Here’s another dark secret for you, Abraham Lincoln had no intention of freeing the slaves. The South overreacted in fear, and after hundreds of thousands of Union soldiers died, Lincoln felt that the Emancipation proclamation was ‘good politics.’ That it gave some meaning to the Civil War. Oh, and Robert E. Lee did not fight over slavery. He fought on the issue of state’s rights. A debate that is still raging strong in my country.

So, why would I possibly celebrate such a thing?

Especially since I have not been home in almost five years, don’t vote anymore, and am unlikely to ever return there to live.

For the answer to that one, I want to point to parallels in my life, home, and family.

I have not spoken to my mother in over a decade. Heck, it is highly unlikely I ever could. She is almost certainly dead.

The biggest part of growing up is recognizing that your parents aren’t perfect people.

The first step in solving any problem is recognizing there is one.

But recognizing that there is a problem, or even working to solve that problem, should never, ever negate the positives.

My mother was a bulimic, prescription-drug addict, and racist. She favored my brother over me. In fact, her final words to me were: ‘TerriLynn, not everything is about you.’ This said in reference to bragging on my brother’s new baby, after my miscarriage and me explaining how I felt.

We are not perfect as mothers. I certainly am not – just ask any of my six children.

We are not perfect as human beings.

Every last one of us is deeply flawed.

We all have our prejudices.

But that should never keep us from remembering the good as well as the bad.

America is not and never was ‘the greatest country in the world.’ Neither was UK/Great Britain.

Because there is no such thing. Like the people who inhabit it, all countries are a mix of both good and bad.

And yes, I decry racism, sexism, homophobia, transphobia, and all other forms of prejudice and injustice.

And hopefully, we as human beings – men, women, cis- and trans-persons, black, white, Latino, Native American, neurotypical and neurodivergent, yes, even rich and poor – can finally deliver upon these great words…

I say to you today, my friends, though, even though we face the difficulties of today and tomorrow, I still have a dream. It is a dream deeply rooted in the American dream. I have a dream that one day this nation will rise up, live out the true meaning of its creed: “We hold these truths to be self-evident, that all men are created equal.”

See even Martin Luther King, Jr. got it wrong…

We are not equal. We are unique. Different. And wonderfully perfect just as we are. But one day, someday…

We can’t be consumed by our petty differences anymore…

And hopefully, it won’t take an invasion of badass aliens to get us there.

So, Happy Independence Day wherever you are, whatever the color of your skin, whether you are a penis-possessor or a pussy-owner, whether you are bi, trans, homo, lesbian, pan, a- or whatever else, whether you call on the name of god, allah, odin, zeus, the goddess, fate, or anything or nothing else…

We, humanity, face challenges that are global and microscopic, demons from without and within us all, but we are more alike than different.

And one thing I do believe today…

America is not even a place.

America was an ideal, a symbol, of something bigger.

But what I celebrate today is the spirit of Hope and yes, opportunity, that word once held.

Maybe one day it will again.

Or maybe one day we will have another word for it.

But five thousand miles, fourteen years, and the deepest of disillusionments will not keep me from these words…

I’m proud to be an American…

And a deeply flawed human being.

I’m not perfect, neither was the country where I was born, or the one in which I live, but that should not stop any of us from celebrating who we are.