The past couple of days have been another lesson in that. As I have said before many times, there is a central theme to my body of work. Even my non-fiction is laced with it. I have called them Tara’s Three Rules of Life, Love & Happiness. Although lately, I have added a fourth. As a reminder:

I was reminded of those lessons and my own life last night.

@HomeCrazzyHome is a refuge and fortress built upon and around the beautiful rainbow infinity of neurodivergence. For those of you, who may not be familiar with that term, it is a life-affirming way of saying brains that just work differently. Autism. Dyslexia. ADHD. Schizophrenia. And a plethora of others. I hope some of you will take the opportunity to learn more about our world. This article is a good place to start with basic terms.

As some of you who follow this blog or my other one know, my teen daughter PanKwake is autistic. Since she was a baby, I knew this, as only a mother could. She was almost seven before I finally got the ‘experts’ to confirm it. I have read so much of what they wrote…and none of it felt right. I have tried so many things they recommended, only to make her life and my own harder. In the end, only three things mattered – understanding, acceptance, and unconditional love. And those are sometimes tested. And sometimes, I fail.

What many of you may not know is that along this path to understanding, acceptance, and unconditional love, I began to see glimpses of myself. I started to wonder – could I too be autistic? I knew that I was neurodivergent. Perhaps it is ironic that I, a writer, am dyslexic. Although I have discovered, I am not the only one. But autistic, too? Was I like PanKwake multiply neurodivergent?

I began to take online tests. Self-diagnosis is a minefield of controversy, not just with those ‘experts’ who completely dismiss it, but with many other #ActuallyAutistic. But having fought for years and endured a highly traumatic diagnosis process that took months with PanKwake, putting myself and our family through all that for a label did not make sense.

The only reason I asked was one of identity. To understand myself better, so that I could accept things about myself, like my need for order, my increasing social anxiety, and sensory issues. Because in the end, no matter how much someone else loves us, if we cannot unconditionally love ourselves then we cannot sustain a relationship with anyone else. Be they partner, friend, or child.

So I took those tests. Yes, plural. Somewhere between three and five. The results ranged from ‘maybe, requires further investigation’ to ‘yes.’ But I still struggled to accept my own autistic identity. Then, one question changed my world forever. It asked you to close your eyes and picture the person you loved most. I could not. Sure, I could describe bits of Alan. The beard for certain. But I could not actually ‘see’ him.

As a writer, description is my biggest weakness. Whether it be a setting, the physical attributes of characters, or actions, it is challenging. And I often short change it in favor of the deep third person or free indirect discourse. The simple reason is – I cannot picture those things in my head.

When I began writing Ægir’s Captive, I knew exactly what Kirsty looked like. I had modeled her on PanKwake’s occupational therapist. But getting that young woman to pose for the cover of a naughty romance novel was not going to happen. So, I scanned hundreds of photographs on websites for someone close to her. I came up with a couple of options. 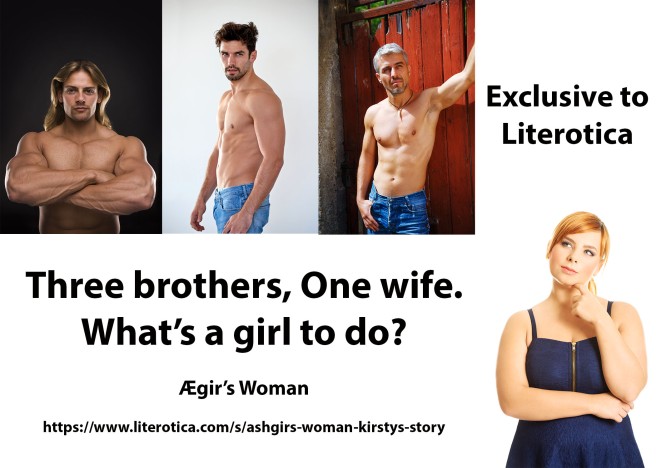 But it was not just Kirsty. I needed, actually NEEDED, photographs of all the others to fill in the gaps in my neurodivergent brain. I needed to put real faces to blurs. I spend days doing so. And now, even though logically I know these are models, they have become my Ægir’s family. I want to travel to Norway, experience the fjords, Northern Lights, and perpetual daylight for myself. For those same reasons.

That is not the only way that neurodivergence and #ActuallyAutistic affect our @HomeCrazzyHome though. There are others. Dyspraxia, especially on the stairs, combined with irregular sleep patterns forced Alan to buy this house when his perfectly posh one proved unsuitable for PanKwake.

Of course, the biggest challenges have always come when PanKwake’s #ActuallyAutistic needs conflict with my own. I am not proud of how I have handled some of those situations. Thankfully, just as I struggle with visual memory, PanKwake does with short to long term memory transfer. She does not even remember many of my worst failings as a mother.

Like many other autistic people, PanKwake struggles with food. It is more than just smell or taste, but also texture. She has always had a limited range of acceptable food options. Lately, that has been an even bigger issue with her approved ‘sweet’ foods. The British government is going Big Brother and mandating the reduction of sugar in many foods and drinks. What they did not consider is the impact of that on people like PanKwake. It has cut an already limited selection down to a handful of things.

Last night was one of those times where my autism and hers collided head to head. I had spent all day Saturday at my Old Lady Quilting club. Peopling is always a challenge, but especially then. Then, I had cleaned most of the downstairs yesterday. And our artist friend had come over to finish the mural in the clubroom – more peopling, even if it was my people.

I was exhausted. I had gone to bed early. I was happily asleep. And PanKwake needed feeding. Sweet, not savory. Hot chocolate. Not that bad. I can make that and be back in bed in less than ten minutes. My body might be awake but that won’t give my mind time enough to come alive.

Except…we had no milk. And it was Sunday night. The shops were all closed. We finally googled one convenience store that was open. It was raining. So, even though it is not a very long walk, I took a cab. I got the milk, had a lovely conversation with the taxi driver, and came home to make her hot chocolate. Except…an hour after this whole thing began, my brain was now as awake as my body.

I can’t describe what my autism feels like in those moments. The panic. The rage. And the fear that courses through my whole body like a living thing. It feels like spiders, tiny, invisible ones are crawling all over my body. Or perhaps more like those horrid, old, b-grade, alien, sci-fi movies. The ones where the aliens take over your body, reproduced, and then erupt out of your very skin.

When it was just the two of us, me and PanKwake, I would have screamed and yelled. Not the right thing or something I am proud of. She did not do anything wrong. It was NOT her fault. And I, as the adult, the mother who chose to have a child, bore the obligation to do better. But I, too, am autistic. And I have all those things inside of me.

I remember, back when I was trying to all those things that the ‘experts’ said were right. I had gone to social services for a ‘support package.’ We had thrown our lives open to their intrusions. At first, we had the world’s best social worker. He understood, he got it.

I remember saying to him during the process, “Of course, no matter how much money or support we are awarded. It can never be what I really need. Someone to hold me when things go bad. To tell me that I am doing the best I can. And that everything will be alright.” That whole process fell apart horribly, but that is another blog and not relevant here.

But last night, as I handed the cup of hot chocolate to Alan to take to PanKwake, I knew that I had been right. No amount of money could have replaced him as our intermediary. He took that to her. Being a night person himself, he chatted with her for a few minutes. Big beautiful brains meeting and grinding against one another, long past the point that mine had exploded.

Then he came to me. The high priest to my high priestess. And he righted my universe. Details are too intimate. But those rules three and four at work. And I knew in him, in those moments that I was doing the best I could and that everything would be alright.

I will never find the words to describe the beautiful healing power of two (or more) bodies and souls uniting. Coming together in their imperfections to form something stronger. Each giving what they have to offer, each taking what they need without apology. And the whole being more than the sums of its parts…filling holes and mending broken hearts and minds. I will never be a good enough writer for that. Then again, no one ever is.

But I will keep trying. Why? If I know I am not good enough, why keep trying? Because maybe, maybe my weak attempts, will encourage someone, one person to take that chance – to believe in life, love & happiness. To give without thought of receiving. To open yourself up without fear of rejection. To truly seek to understand, accept, and love unconditionally. Yourself. Your child. Your partner.

Because that, more than ballots or votes, will change this world. One person. One couple. One family at a time. Whatever form that family takes – hetero, homo, pan, demi, poly – none of that matters. Because sex heals…and nothing done in love can ever be wrong.

If my paltry words give one person hope then my life has meaning.

Oh, and that Ægir’s Wife is almost finished. Chapter 11 is now live on Literotica. I will begin working on Chapter 12, the finale, tomorrow. I was supposed to do it today, but I overslept. And you want to hear perfect? I was bemoaning that and he said, “Your body needed it after last night.”

This season that reminds us god or the goddess or Fate or whatever is out there, whatever you believe in sends us teachers, my prayer for each and every one of you, for the world itself, is that you know that feeling of understanding, acceptance, and unconditional love. That ‘sex’ transcends all you think you know or believe to become the restorative and healing balm to our soul that it was meant to be.

Goddess bless you each and every one.