Admission here: I have barely gotten anything more written in ya’lls favorite story. But I am working on it…and finishing the unpacking in the Pink Peril. I mean Pink Paradise. But I thought I would share the tag end of Part 1 and beginning of the new stuff. I would love your thoughts on her musings on the nature of the Dom/sub relationship…so speak up, folks. 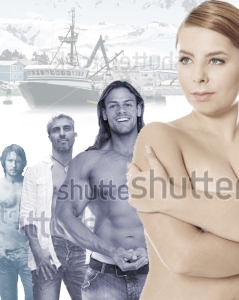 She used the element of surprise to wiggle and push out from between their hard bodies. She was glad that Mikael had finished the job of undressing her as she fell naked to her knees at their feet. She was certain that her pregnancy made the motion far less fluid and graceful than she would have liked. Sven certainly would have trained his subs better. But she would not have it any other way.

She dropped her head towards her chest as she spread her knees as far apart as she possible could. Her pregnancy precluded her bending forward on the floor and even folding her arms behind her back drew uncomfortably upon muscles and ligaments that were already stretching to accommodate her expanding waistline.

In the end she settled for placing her hands palms up on her knees as a sign of her submission. She was breathless not just from the exertion, but more so from the desire and anticipation coursing through her whole body from toes to the roots of her hair. “Yes, Master. Yes, Sir. Yours to do with as you wish.”

She was glad that her head was down because she could not stifle the satisfied grin at the quick intake of breath she heard from them both.

Oh yes, this lifestyle was most definitely misunderstood. Doms were not tyrants with some deep psychotic need for power over another human being. And subs most definitely were not powerless victims. In some ways, this partnership was the ultimate form of equality. Both needing something and in turn giving back. Facultative symbiosis as scientists would call this relationship that was not absolutely necessary but gave each a greater chance of survival. Or happiness in this case.

Oh…and my goal is to finish Chapter 9 and post it to Literotica by this weekend. Fingers crossed and the crick don’t rise.