Growing up some of my fondest memories center around my Barbies. Long hours spent playing with them under the kitchen table as Nanny and the adults chatted. Aunt Mildred sewing them clothes out of the scraps she had left over from making a dress. Even when that meant she stopped what she was doing and took five or ten minutes just for me. And yes, as I grew older…well, let’s be honest girls…Barbie is how most of us first begin to explore our sexuality.

But over the years these iconic dolls have taken the heat, rightly or wrongly, for body image issues. Do I believe that all that time spent playing with her was the cause of my teenage battle with bulimia? No, it is much more complicated than that.

Now was her unrealistically tiny waist and massive ta-tas a contributing factor? Maybe…though in my case I doubt even that since I bathed as a small child with either my Nanny or mother and was thus exposed to the natural female body…even as it aged. 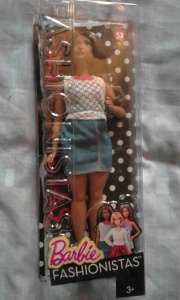 As a mother though, it is something that has concerned me. My older daughter adored her Barbies almost as much as I had (honestly still do). She has a weight issue and the resultant body image/self-esteem challenges.

And PanKwake? Well, while she does not have weight issues, I have always made the effort to include Barbies in her collection that reflect her black and mixed race heritage. But still she preferred the blond haired and blue eyed originals. Will that have an impact upon her self-image? But again that is complicated by her autism.

Today though…I want to give a big thumbs up to Mattel and Barbie. They have introduced a new line of ‘realistic’ Barbies…reflecting a variety of sizes, shapes and ethnic heritages. PanKwake and I are the proud owners of a ‘fat’, ‘curvy’, ‘plus size’, ‘normal’, whatever term you want to use one.

And I cannot wait to start making her the BEST clothes ever!!!! I will do Aunt Mildred proud.

Mattel…Just one bone to pick with you! The Kens are all still basically the same. Different ethnicities sure. But same height…tall. And worse…same six pack.

If I learned one thing from this blog, it is that body image is not a women’s issue. Men have it just as hard…perhaps worse. I had to quit REAL Man Monday because I could not get enough volunteers. It was not just my bear friends that were insecure either. Even the average and above average guys were terribly insecure about their appearance.

So Mattel, next line of Kens…

You have done a good thing…giving little girls Barbies that more accurately reflect the vast range of sizes, shapes and colors of the human female form. Now let’s give them the same with their potential mates.