Ironically, or I guess not so much given our shared heritage, those are the colors of both the Union Jack and Old Glory. The place I live and the one I call home. But that is about where it ends. Yesterday, I had the privilege to be home for Veterans Day. In America for a patriotic holiday and I have never felt prouder.

When I was a teen, my grandmother married her ? husband (Elizabeth Taylor had nothing on my Gran-Gran). He was a career US Navy NCO, whom I came to call Papa Curt. He had seen action, meaning transport into and out of war zones, in Korea and Vietnam. Back when cable was a new thing, the man was fascinated with the burgeoning History Channel and its war documentaries. He read books on the subject and talked of little less. But there is one thing he told me that I shall never forget, “Terri Lynn, you will never truly appreciate America until you have lived in another country.” After a decade exiled in London, I can say… “You were right, Papa Curt.”

I am not knocking the UK or London, but there are differences that I miss with my whole being. Little things that make this place home:

Those are the little things beyond just the food or feeling closer to people I just met than ones I have known for months/years. But yesterday? That was special. Truly special.

I am staying this trip with Captain America…my Sergeant Mike Dom friend that I have hinted about for months. He is of course Marine (no such thing as retired or former with those guys…once a Marine, always a Marine) and his dad too. So the day began with free breakfast at the local hotel. But that was not all, there was free lunch for the guys at TGI Fridays. Oh wait…the day before, we went to the local grocery store and they saw his sweat shirt. The manager came over and swiped his card for a 5% discount…and said ‘thank you for what you did.’

The most special though was dinner last night at Appleby’s. The place was packed. And in addition to the free food for our guys, they had patriotic entertainment. Two women singing the Star Spangled Banner…better than some celebrities at the Super Bowl have. And one of their waiters playing Taps on his trumpet. They had signs all over the place from previous years with signatures of the Vets, who had eaten there…and one out front for them to sign this year.

But more than any of all that, it is the woman on Monday as we waited at the train station into Philly. She saw Captain America’s Marine t-shirt and struck up a conversation. When she found out about Iraq, she said…’Thank you for your service.’ A total stranger…an angel in disguise.

For the little girl, who grew up watching TV coverage of our guys returning from Vietnam to have blood thrown on them and called…I will not even dignify that by finishing the sentence, yesterday was reassuring. No matter what you think of war…and at heart I am a pacifist, but others in this world are not, so I am eternally grateful to the men and women who make those sacrifices to keep the rest of us safe. And as the mother of US Navy personnel, I am pleased to know that others see the value in what he does.

So goddess bless, protect and heal my country, the men and women who serve it, and the families who make the sacrifices whether for a time…or especially the ultimate one. Let me add, my voice…Thank you for your service.

Oh and I bought my souvenir from this trip last night at Appleby’s. Want to see? 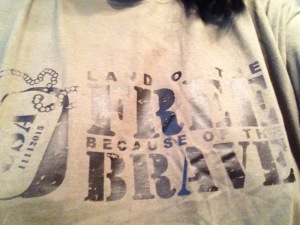 And I shall wear it proudly in London…and woe be it to anyone who says anything to me about it.