I spent this weekend with a friend doing what he calls…running around the woods with geeks hitting one another with plumbing supplies. The proper term would be Live Action Role Play. It was blast…and completely overwhelming.

As a writer the only analogy I can use is…get 200 writers in a room, tell them to write a story about a Viking mother attacking their village in revenge for killing her son, who had attacked them first. Now here comes the fun part…an editing team needs to put all 200 of those stories together into a single COHERENT novel. Sound easy?

Like I said I was completely overwhelmed. First of all, like I keep telling everyone…I am truly an introvert…even if no one will believe me. If they saw me on Friday night or Saturday, they would. I did not have a full blown panic attack but I did sneak away to cry for a bit.

But by Saturday night, I had recovered enough to participate in the main storyline. Oh, I forgot to say my character was a priestess of the goddess of love…something I would know nothing about. (Priestesses of the Goddess is my yet unfinished Lit novel that I will be completely shortly.) So I was put with the healers to care for the wounded. Funny thing about my priestess…she was a Northmen, i.e. Viking. See any pattern here, folks? So in addition to be this peace loving hippie with healing powers and the gifts of mercy and forgiveness, she walked around with a two-handed battle ax almost as big as she was.

But you know what? Even though this was just acting, role playing, I really got an insight into how PTSD happens in our soldiers…like Master Sergeant Mike. The wounded were coming at us so fast sometimes, it was utter and total chaos. You forgot everything you had learned and were supposed to remember. Then it was quiet again. I stood there and thought…wow, if this is play acting, just imagine… Perhaps for someone like Mike, who had been at it for so long it would not be quite as bad. But for those young, first timers…battle must be utter and complete hell…more so than any mythological place meant to scare us to someone’s vision of god. 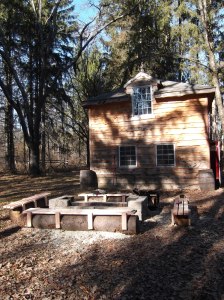 So would I do it again? Sleep out in the woods in a cabin; spend days sewing costumes that ripped and tore in ‘battle’; walk and walk and walk; and subject myself to that sort of chaos? I plan to in the spring…and hopefully next time I do a bit better. But I can see how this can become such an addiction for people.