Today we look at the practical side of submission…Respect.

Respect is the corner stone of all relationships…from the United Nations to friendships to your bedroom. It is the oxygen of love, because without it even the strongest attraction will quickly wither and die.

And it is sorely lacking in our modern world. I can vividly recall at least half a dozen times where I have been privy to the intimate details of perfect strangers’ relationship woes…because she was screaming at him on the phone…not caring who heard. “I don’t need this shit.” “Who do you think you are?” “I ain’t taking this crap no mo’.” Now all of those are valid questions and comments. But not at the top of your voice, in that tone, on a public street, bus or train. I am not being judgemental (well, only a little here). I have done it once or twice myself…to EXes and over important shit.

That is the key…IMPORTANT shit. No woman should be lied to or cheated on. But all too often that is not the case. I remember once a very put-together upper middle class woman on a commuter train. She literally lambasted her husband/partner on the phone. The cause…he was working late. OK…a common enough relationship issue. But not one that responds well to that kind of response. One that would much better be dealt with calmly, reasonably and discussed in private.

The thing is that women have forgotten something…you get more flies with honey than you do with vinegar. It is a lesson I learned as a child. You see I was raised by my great-grandmother in the deep South in what was called a ‘mill village.’ When companies built textile factories they would also build dozens or hundreds of small wooden frame houses around them, so that they could have their workforce close by. They would sell these houses to workers and take the payments out of their checks each week. Of course, by the time I came along in the ’60s most of Nanny’s friends had long since retired from the mill…and many of the men, like my great-grandfather were dead, leaving a majority of widows.

But the handful of marriages that I was privileged to witness left a lasting impression on me for one reason…the mutual respect I witnessed in those couples. Honestly, it is not something I have seen since. I want to share with you the story of two of those marriages…Miss Ethel and Bill and Aunt Mildred and Uncle Frank. The reason for two…because they are opposite ends of the spectrum.

This is a woman who in the 1970’s, well into her 50s and early 60s, would lay out in her back yard…in a bikini. She was a ‘strong’ woman. And Bill adored that woman, worshipped her…yes, reminiscent of a male sub with his mistress. Except for one thing…Miss Ethel never once humiliated or degraded this man. Don’t get me wrong…she made her point. But she did it respectfully and without undermining his manhood. I wish Miss Ethel could have had a heart to heart with the woman on that train…I bet she could have gotten that husband to curtail his long work hours…without raising her voice and certainly not airing their dirty laundry before hundreds of strangers.

Now Aunt Mildred was the exact opposite of Miss Ethel. Honestly, I am sure she would spin in her grave if she knew I said this, but Aunt Mildred was my first exposure to a ‘little’ (damn, I keep meaning to do that one on Freaky Friday…for now just Google it if you don’t know). Right down to calling Uncle Frank ‘Big Daddy.’ Now, Uncle Frank was a gruff man with the deepest voice I have ever heard and could scare my six year old self to death…think Johnny Cash. But when it came to Aunt Mildred…he was putty in her hands. That man loved his wife.

When I think of these two couples at opposite ends of the relationship spectrum, the commonality is one thing…MUTUAL respect. One that builds up rather than tearing down. An art form that is sadly lacking in too many modern relationships. One I try very hard to practice in my own…and let me tell you…when combined with honesty…it is powerful one-two knock out punch. I think this just about says it all… 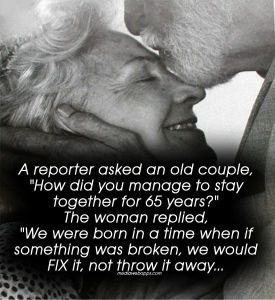 But as I have said before…that takes two people and that ALL Cap word above…MUTUAL!