It is a lesson I shall not easily forget. I was not even comfortable admitting my own submissive nature, let alone the depths that I shared with you on Thoughtful Thursday. It was my first summer fling after the separation and eighteen months of celibacy. My Marine Marco was one of the best Doms I have ever had…and to my knowledge was not even in the lifestyle. It just came natural to him.

So the night before I had been in his hotel room with him pulling my hair…and the rest I will leave to your imagination. But that day I was rushing to an appointment when I saw a man dragging a woman down the street…by her hair. Now the BAD side of multi-culturalism is its hands off attitude towards certain things…it’s their way/religion/whatever. But not this girl, I got on my mobile phone and called the police…the only one who did.

I have thought about the irony there often…but it really is not. Oh sometimes, there is very little difference in the physical acts of sado-masochism and abuse especially in the moment. But the huge difference is in what happens before (consent) and after (true loving after care). One is freeing, constructive and mutually beneficial and the other is controlling, abusive and destructive…and most definitely imbalanced.

But being constantly demeaned, called names, controlled and rejected by someone that is supposed to love you, someone you should be able to trust, someone that you may even live with, then to turn for help to police, social services or charities only to be told…sorry, we only help those who REALLY need it. Where are your bruises? Come back when he (or she) hits you. That eats away at your soul.

The thing too is that this type of abuse is just as prevalent in men as it is in women. ‘Where you going? When will you be back? Who you going to be with? What time will you be home?’ If a man demanded answers to these questions at the top of his voice, blocked the doorway and would not let his wife or girlfriend out the door until she answered, her family and friends would be up in arms, telling her what a controlling and abusive man she was with, demanding that she leave or get help.

But if it is the woman who does it to her boyfriend or husband…well, no one bats as eye. If she refuses to allow him to spend a Friday night with his friends or won’t allow him to spend money on his hobbies, no one considers that abusive. But if it were the other way around, people would be shouting about isolating her from her support network and financially enslaving her. 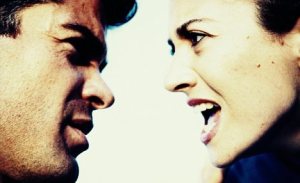 Of course, we all think of the stereotypical nagging wife, but the truth is…that is abuse. That eats away at a man’s self-esteem. Emasculates him. And yes, does psychological damage that can last for years or a lifetime. And as a society we laugh at it. We think it is funny. We expect him to just take it with a smile, to never retaliate.

But that is not right any more than the woman who ends up in the emergency room with a broken cheek. Just because doctors and police can take photographs of the damages to her face does not make it any more real than the emotional wounds born by men in controlling and emotionally abusive relationships.

Am I demeaning the damage of physical violence to women in particular? No. But neither should we as individuals, a society or the legal system minimize the power of hate-filled words, controlling behavior, isolation or financial enslavement…whether the victim be a woman or a man. All deserve our support and help to get out abusive situations.