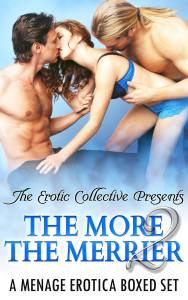 Continuing our theme of The More The Merrier 2, today Thoughtful Thursday takes on the complex issue of polyamory. This boxed set by the Erotic Collective, out October 7th, runs the gamut from the loving husband, who shares his wife one-off with a friend as an anniversary gift, a hot one-night stand with your old high school flame and a mutual friend at the class reunion, to my happily ever after polyandrous marriage to twin brothers. You can’t get much wider a range of what menage (or more) can be. So today, I thought (ha-ha) we would take a look at this thing called polyamory in all its forms.

Historically, poly is more the norm of human relationships than monogamy. Think about our caveman ancestors…no white weddings there. Anthropologists believe that the small bands or communities were likely to practice a share and share alike attitude towards sex. It was not until our ancestors came out of their caves and moved from hunter and gatherers to a sedentary agrarian society that monogamy became the fashion. This was for one simple reason…succession. Men wanted to be ‘certain’ that they passed their resources onto the progeny and only theirs. It is also the point when women and virginity became a tradeable commodity. Even today indigenous peoples are likely to have a much more open view of relationships and sexuality than our Western societies.

Of course, once man began to bring their ‘gods’ into it…things only got worse. Women lost more power over their own bodies…and men gained the ability to have more than one wife. Yes, polygamy became the norm in many societies and still is to this day in some. But then too women/wives are nothing more than symbols of wealth and power. Sorry, if I sound bitter, but while I am far from a traditional feminist, I do believe that women should cherished and valued for far more than their bodies and ability to spit out sons. Of course, in a handful of societies, it was us girls who had more than one husband, called polyandry. But then too it was about keeping limited resources…all in the family.

As we move into the 21st century, a post-modern world of more options for everyone though there is a growing movement called polyamory that challenges societal views of what a relationship should be. With traditional monogamy falling apart at the seams with a divorce in most Western societies approaching 50% or more and dating becoming nothing more than trying another person on like you would a dress in the shop, serial monogamy, people are beginning to examine what they want from a relationship.

And this goes way deeper than merely sex. It is naive to believe that is the only force at work here. The truth is…WE ARE ALL POLYAMOROUS! That’s right…none of us get everything we need emotionally or intellectually from our mate. We all have friends of both genders who provide us with a wealth of experiences, ideas and feelings that we cannot or do not get from our significant other. Modern polyamory is merely recognizing that and questioning old societal strictures that limit the expression of such love to strictly non-sexual.

As someone, who is sapiosexual and always attracted to my best friends (male and female), I can understand that on a visceral level. As the mother of six too, I fully appreciate the central core of poly…loving all the same and different. That is why I am the first to admit…that ain’t easy, folks. Giving to each what they need, balancing their needs and your own, being fair, and managing jealousies with compassion and understanding…that takes a fucking lot.

My one experience with poly was a disaster. While my partner and I had from time to time practiced that casual, one-off sharing that Anne A. Lois writes about in Irish Blend, this was different. The whole time we were together, he had a female friend, who I knew wanted more than just his friendship (we women especially empaths know those things), but he kept denying it. Then he went away with her for the weekend…supposedly ‘just as friends.’ He came back to admit that i had gone further. He wanted polyamory…both of us. Thing was that this was not a mutual decision…this was a take it or leave it thing. I took it…and lived to regret it…because he could not do any of those things. The very first time he was with her he ignored me for three days…when we shared dozens or hundreds of texts a day usually…not a single…how are you?…for three days. 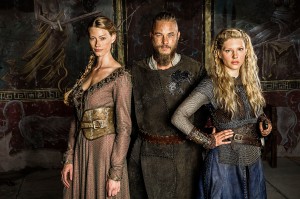 Needless to say, this shieldmaiden does not stand for that shit anymore than Lagertha took Ragnar’s betrayal. Oh…there is another take on it…the History Channel’s series Viking, which is somewhat based on what limited knowledge we have of that ancient culture. From the scene where they stand side-by-side as a couple and tempt the poor captive priest to join them for the night. To the scene of a religious festival with naked people running about the mountain camp around their temple ‘fornicating’ like mad. To the clear instance of Ragnar cheating and betraying Lagertha…an act that resulted in the end of their previously strong relationship. To Lagertha’s one off choice to share his bed with the new wife. It runs the gamut…just as modern polyamory does. Just goes to show…nothing new under the sun, folks.

So would I? Try it again? Yes, like I said in many ways we all do already. The thing is that I have grown and the sex side (or BDSM) holds less sway with me. I would be more interested in the real relationship side of it…LOVING two or more people. That is the key…the amory part of it. This distinguishes it for me at least from swinging or sharing or swapping. Yes, I have done all of those things…and they left me cold. To me, who worships a goddess of love, sex is tantamount to prayer…a communing with another soul, myself and my goddess. That is why I gave up casual sex long ago…I believe every time you have sex with someone you give them a piece of your soul. I have become way more choosy about who I give my soul to.

But…I could so easily see an Ægir’s type thing…or the type of deep, abiding and loving friendship between Katie, Chance and Chase. More about that another day though… Bottom line…poly requires transparency.